skip to main | skip to sidebar

Before you have a heart attack that a dead man is blogging, my name is Steve Schneider.  I don't fancy myself a great writer or thinker, but I've hijacked my Dad's blog.  He doesn't need it anymore.

The current insanity, as my father would put it, relates to all things Liberal. Anything goes, so they say.  Let's have a look at this yard sign.  Its trendy now to announce your delusion to the world these days.  There are a few of these posted around my neighborhood and I have some thoughts on each line. 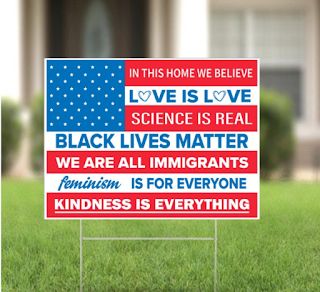 Thanks for humoring me.  --Steve
Posted by Steve Schneider at 6:25 PM No comments:

I have not posted to political brambles in a long time, over a year.  That's mostly because I've developed a Facebook addiction to what I call Whack-a-Lib.  It's a mindless game and way too easy.  The gist of it is: 1) a liberal says something stupid (that's easy since most of what they say is stupid) 2) disagree offering some cogent reason.  3) liberal repeats what he says and without addressing anything you said suggests you didn't understand him the first time. 4) you add additional material demonstrating your point of view. 5) liberal goes nuts and starts calling you names.  6) you point out that he's never so much as considered any of your points which demonstrated he was wrong. 7) name called accelerates. 8) point out that people who refuse to accept reality as it is are delusional.

The insanity is simply overwhelming these days.  It doesn't seem that long ago when none of the current insanity was even on the radar screen.  LGBT whatever that is has been raised to the status of some sort of immoral religion.  Transgender bathrooms.  Brainwashing children in school with the proper pronoun to call them while they're encouraged to do delusional things like imagine they are of the other sex.  Parents physically abusing their underage children by encouraging them to be transgender.  Pulling down statues of revered figures from American history.  Pretending that disagreement justifies extreme violence.  Disrespecting a duly elected president for no reason but that he wasn't your candidate.

Of course this list could go on and on and on because the insanity seems to be accelerating.  It doesn't seem to show any signs of slowing down.  Crazier and crazier and encouraged by people that should know better.   Meanwhile Rocket-Man is demonstrating hydrogen bombs in North Korea.
Posted by Ray Schneider at 1:29 PM No comments:

"Know your enemy!" is a fundamental principle.  Western Civilization was built over three millennia to become the soundest and most fruitful culture in the world.  The West is crumbling today because it has lost faith with its own foundation.
Posted by Ray Schneider at 10:13 AM 1 comment:

A Primary Lesson Of History: DEMOCRATS ARE LIARS

An Example: (Sent to me by a good friend)

Just in case some of you young whippersnappers (& some older ones) didn’t know this. It’s easy to check out, if you don’t believe it. Be sure and show it to your family and friends. They need a little history lesson on what’s what and it doesn’t matter whether you are Democrat or Republican. Facts are Facts.
Social Security Cards up until the 1980s expressly stated the number and card were not to be used for identification purposes.

Since nearly everyone in the United States now has a number, it became convenient to use it anyway and the NOT FOR IDENTIFICATION message was removed.

Franklin Roosevelt, a Democrat, introduced the Social Security (FICA) Program. His promises are in black, with updates in red.

1.) That participation in the Program would be Completely voluntary [No longer voluntary],

3.) That the money the participants elected to put into the Program would be deductible from their income for tax purposes each year [No longer tax deductible],

4.) That the money the participants put into the independent ‘Trust Fund’ rather than into the general operating fund, and therefore, would only be used to fund the Social Security Retirement Program, and no other Government program [Under Johnson the money was moved to the General Fund and Spent], and

5.) That the annuity payments to the retirees would never be taxed as income [Under Clinton & Gore up to 85% of your Social Security can be Taxed].

Since many of us have paid into FICA for years and are now receiving a Social Security check every month — and then finding that we are getting taxed on 85% of the money we paid to the Federal government to ‘put away’ — you may be interested in the following:

Q: Which Political Party took Social Security from the independent ‘Trust Fund’ and put it into the general fund so that Congress could spend it?

A: It was Lyndon Johnson and the democratically controlled House and Senate.

A: The Democratic Party.

A: That’s right! Jimmy Carter and the Democratic Party. Immigrants moved into this country, and at age 65, began to receive Social Security payments! The Democratic Party gave these payments to them, even though they never paid a dime into it!

Now, after violating the original contract (FICA), the Democrats turn around and tell you that the Republicans want to take your Social Security away!

And the worst part about it is uninformed citizens believe it! If enough people receive this, maybe a seed of awareness will be planted and maybe changes will evolve. Maybe not, though. Some Democrats are awfully sure of what isn’t so — but it’s worth a try. How many people can YOU send this to?

Posted by Ray Schneider at 9:54 AM No comments:

The Ten Things That Show Global Warming Is Nonsense

Check it out HERE
1. Temperature records from around the world do not support the assumption that today’s temperatures are unusual.
2. Satellite temperature data does not support the assumption that temperatures are rising rapidly:
3. Current temperatures are always compared to the temperatures of the 1980’s, but for many parts of the world the 1980’s was the coldest decade of the last 100+ years:
4. The world experienced a significant cooling trend between 1940 and 1980:
5. Urban heat island effect skews the temperature data of a significant number of weather stations:
6. There is a natural inverse relationship between global temperatures and atmospheric CO2 levels:
7. The CO2 cannot, from a scientific perspective, be the cause of significant global temperature changes:
8. There have been many periods during our recent history that a warmer climate was prevalent long before the industrial revolution:
9. Glaciers have been melting for more than 150 years
10. “Data adjustment” is used to continue the perception of global warming:

The short form: You're being scammed! TRUTH: The Ultimate Macro-Aggression!
Posted by Ray Schneider at 12:33 PM No comments: 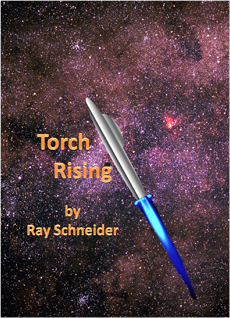 I've been fooling around with NaNoWriMo for a number of years.  For those who don't know what that is, it stands for National Novel Writing Month and extends from November first to November thirtieth each year.  You win if you write 50,000 words in the thirty day period.

I finished NaNoWriMo in 2009, 2012, 2014, and this year, 2015 finishing finally my first science fiction novel in the tradition of middling hard science fiction.

Hard science fiction is stuff that doesn't depend on violating known science (at least not very much) and sticking close to things that are fundamental and true.

My book is about what has to happen to make man-in-space a going concern.  We actually have most of the technology in hand right now to accomplish that for the earth-moon system but not for interplanetary travel which seriously stresses existing technology.

I had a lot of fun writing the book and it's the first volume of what is envisioned to be a three book treatment of man's expansion into space.  Since I'm not really trying to be a traditional author I didn't go to the trouble of finding an agent or publisher.  I'm 73 years old and don't have the time or patience to fool around with those folks so I just put it up as a Kindle book.  I priced it very reasonably I think, at $3.99 to download to your Kindle or read on a Kindle on line.

You can take a look at it and read the first few pages by going HERE  If you like science fiction I hope you'll try the book and give me some feedback on it.  I'm currently starting work on the next volume whose working title is "Outward Bound" to reflect the capability that the first novel ends with.

I grew up reading the science fiction juveniles of Robert Heinlein and the books of Murray Leinster and many other science fiction authors.  That reading had a great deal to do with my decision to become a scientist.  Reality is a great mystery and scientists are those who explore this mystery in the most direct way.  There is a great story about Robert Heinlein going to the Jet Propulsion Laboratory to see one of the big events, the moon landing, not sure which.  He was turned away by the managers and bureaucrats and the engineers protested telling management that if it had not been for Heinlein many of them, perhaps most of them, would never have gone into science.  They got Heinlein in.  After my family, Robert Heinlein is one of only two or three people that had such a large formative impact on my life.
Posted by Ray Schneider at 2:27 PM No comments:

Merry Christmas! Remember You Are Not Of This World 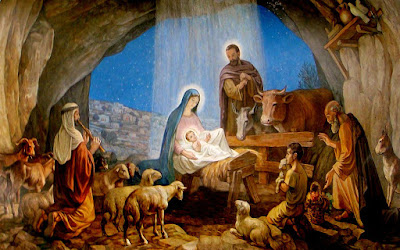 I hope you all have a Merry Christmas and the grinch doesn't find you.  I am so fed up with the war against Christmas and Christianity in general that I could just get a few lengths of rope and go looking for money changers to whip.  OK, maybe that is over the top.  We constantly being told what bigots we are by the bigots.  Christ came into a world no less fallen and no more fallen than our own and brought a promise, the final fulfillment of which is yet to come.  We should pause and reflect on the reason there is a Christmas season at all.  It's all because of God's love and promise of forgiveness.  But forgiveness didn't come cheap.  There's a cross at the end of the tunnel and there are lots of folks that don't seem to be looking for forgiveness because they're caught up in their own delusions.  "No, you're not all right.  You're deeply sick."  God comes into our world, the Word who was the author of everything comes into our world to help us.  Be thankful and celebrate.  God has remembered you in your infirmity.  We are all blessed in Him who comes to save us!

The Roman Martyrology
The twenty-fifth day of December.
In the five thousand one hundred and ninety-ninth year of the creation of the world from the time when God in the beginning created the heavens and the earth;
the two thousand nine hundred and fifty-seventh year after the flood;
the two thousand and fifteenth year from the birth of Abraham;
the one thousand five hundred and tenth year from Moses and the going forth of the people of Israel from Egypt;
the one thousand and thirty-second year from David's being anointed king'
in the sixty-fifth week according to the prophecy of Daniel;
in the one hundred and ninety-fourth Olympiad;
the seven hundred and fifty-second year from the foundation of the city of Rome;
the forty second year of the reign of Octavian Augustus;
the whole world being at peace;
in the sixth age of the world,
Jesus Christ the eternal God and Son of the eternal Father,
desiring to sanctify the world by his most merciful coming,
being conceived by the Holy Spirit,
and nine months having passed since his conception,
was born in Bethlehem of Judea of the Virgin Mary,
being made flesh.
The Nativity of our Lord Jesus Christ according to the flesh.

Links Worth A Look

Politics is a Thorny Maze 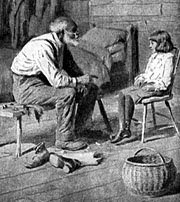 Uncle Remus and a fan